Come and Work With Consbie 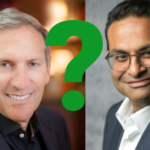 Starbucks announced yesterday that Laxman Narasimhan will replace CEO Howard Schultz as the company’s new CEO. Named interim CEO, Schultz has been CEO and Board chairman off and on at the company for over 35 years and is chief architect of their culture. As successor to Schultz, Narasimhan has big shoes to fill and begs the question, “what can we expect from his leadership”?

Starbucks’ decision to go outside the company for their new CEO indicates either an inability to effectively develop leaders to the highest level or a desire for something different. To be certain, it takes a unique individual to run an organization of this scale. Still, companies can and often do develop CEO successors internally, especially when maintaining the culture is a priority.

When it comes to leadership experience, Schultz and Narasimhan have a few things in common. Both led large, multinational brands and both did so during the pandemic. Beyond that, the two followed very different career paths.

Schultz’s career is almost entirely coupled with Starbucks. He began with the company in 1982 and has played a vital role in its leadership, essentially since the late 1980s. In contrast, Narasimhan began his career with McKinsey & Company, eventually becoming a Director, over 19 years. After McKinsey, Laxman went to Pepsi, where he held multiple roles over a relatively short, 4 years, before joining Reckitt Benckiser (RB) in 2019.

One concern with leaders changing positions as often as Laxman has, is whether they’ve excelled too quickly, rarely if ever, remaining in roles long enough to own the changes they implemented, or be accountable to the long-term implications of those decisions. However, the glaring concern in experience is Narasimhan’s lack of experience leading retail. Obviously, his experience with Pepsi serves him well, relative to Starbucks packaged beverages. However, it is his “transformational” experience the Starbucks board seems most interested in, as the coffee chain looks to reinvent itself.

When it comes to their leadership style, there are indications the two are quite different. First and foremost, how each person positions themselves to the public is very different.

In his short (19 words), very casual LinkedIn Bio, Shultz emphasizes the importance he places on developing people. In contrast, Narasimhan’s About section sounds like it was written by RB’s PR department.

The Digital Leadership Culture Index (DLCI) Score is the standard for ranking organizational leadership cultures based on publicly available data. When comparing RB, where Laxman has led the last 3 years, and Starbucks, we can see the perceptions of leadership styles by both men.

Job Security & Enhancements: Reckitt (66%) still beats the Fortune 500 average (62.66%) but falls much shorter than Starbucks (72%), indicating a gap in the level of trust and professional development styles of the two leaders.

Management: Reckitt and Starbucks are virtually tied at 68% with the Fortune 500 peers t 67%.

Approve of CEO: This is where RB & Narasimhan kill it. Laxman has an amazingly high 84% score, while Schultz has a surprisingly low 61% vs. the Fortune 500 peers are at 78.9%.

Review Highlights: When dissecting the text of employee reviews at both companies, it’s interesting to note that RB reviews from Marketing titled professionals are notably more negative than Starbucks, suggesting Marketing professionals at Starbucks may not be as happy with Laxman’s approach.

In summary, it is surprising to see a company so proud of its culture look externally for their new CEO. Indications are employees love Laxman Narasimhan, though he may not value professional development within the company, according to review scores. Starbucks board and Schultz seem aware of the concerns the external hire raises, as they plan a long transition – October to April, with continued support from Schultz through 2023. Whatever happens, I hope I can still get my iced, venti, almond-milk latte with an extra shot of espresso from my local barista, with a smile every day.

Keep up to date with our Engineering and Manufacturing insights, tools and resources.

Start Your Business With